Jiefangbei (The Liberty Monument), situated in the center of the pedestrian street, was first built in 1940. Today it is dwarfed by skyscrapers and surrounded by walking streets, shopping malls, and facilities for leisure, business, and entertainments; but it is always the spiritual symbol of the Chinese people’s fight against invaders and the great contributions to world peace. It’s a major landmark and key attraction in Chongqing. Every year it acts as a gathering place for people on Christmas and New Year’s Eve, when hundreds of thousands of colorful balloons are released to the sky at midnight. This is definitely a top-billing for New Year’s Eve activities.

Hongyadong, located in Changbai Road, Yuzhong Distric, is renowned for its combination of sightseeing, relaxing,entertaining and business, it was built based on the style of traditional architecter “diaojiaolou”. It absorbs well into the hillside and leans well against the cliffs, and it can be reached from jiefangbei CBD along Jialing River, therefore, it is the best place for appreciating Diaojiaolou complex, Hongya Dripping, old street scenes, authentic Bayu customs, confluence of rivers and various delicious foods as well. It functions as the city balcony.

Hongyadong has 11 levels from the riverside road at the bottom to the Cangbai Road on the top. It’s a major tourist site with old streets, delicious food, restaurants, and the Bayu traditional culture performance. It’s now famous for its night views which can be admired from top to bottom.

Ciqikou was first built in Song dynasty and became prosperous during the Republican period. Located beside the Jialing River, Ciqikou was crowded a busy port with merchants and peddlers, so it was called “Little Chongqing”.

These days, Ciqikou is the only ancient town in Chongqing and attracts crowds of visitors daily, making the town as busy as it used to be.
Duck blood curb in chili sauce, bean curd sheets, peanuts with pepper and salt are just three of the specialties to be found. Handmade fried dough twist or Mahua, also makes a good gift for the family. “Chen Mahua” is the most famous.

While shops selling snacks, decorations, and toys crowd the main street, teahouses, theatres and fortunetellers can be found in those small alleys. 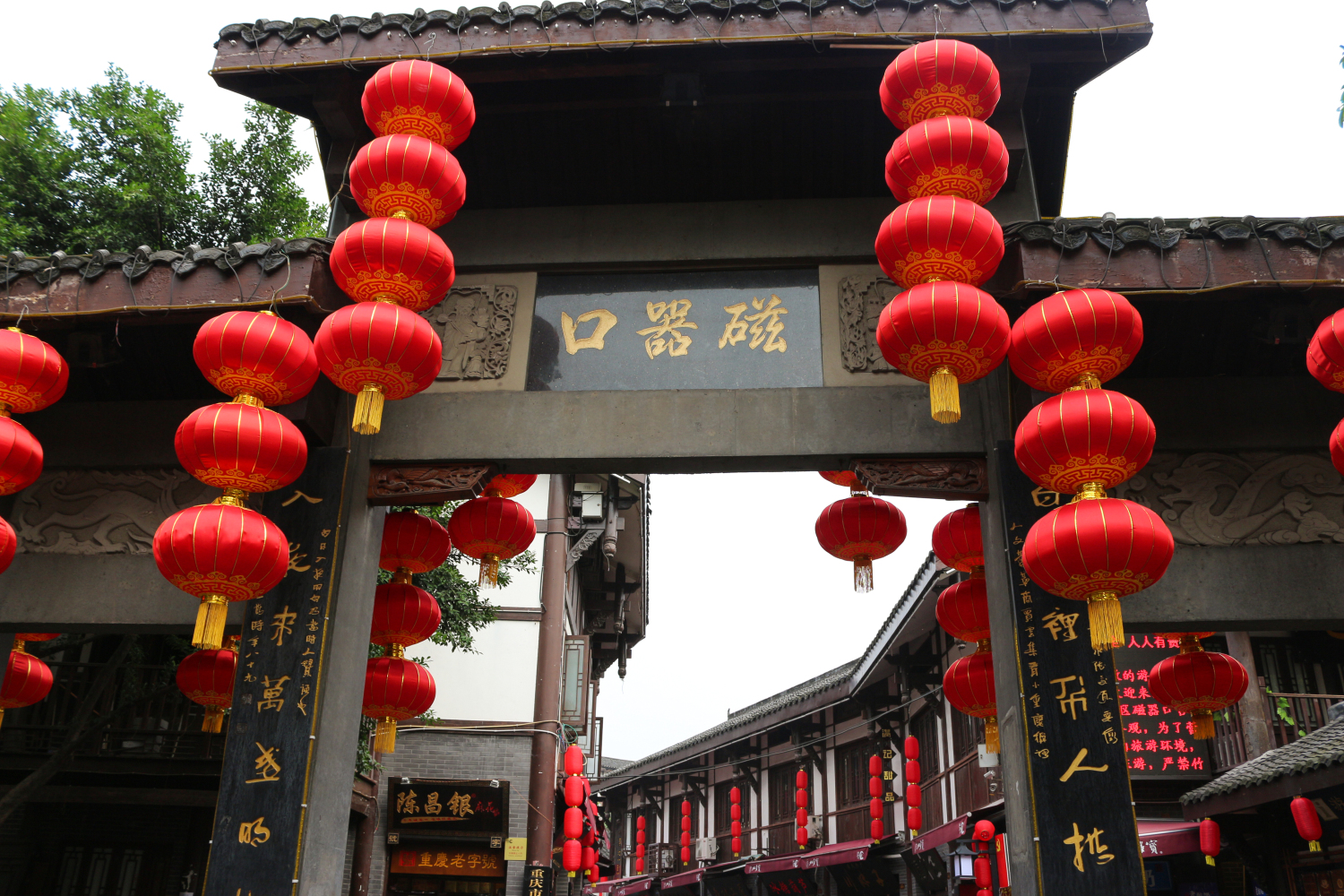 Yikeshu on South Mountain in Nan’an District across the Yangtze River from Chongqing’s main urban area. It is a popular viewing platform named after the single Huangjue tree on the site.

Tips: The best time to go there is on a clear day. You’d better take a taxi there. 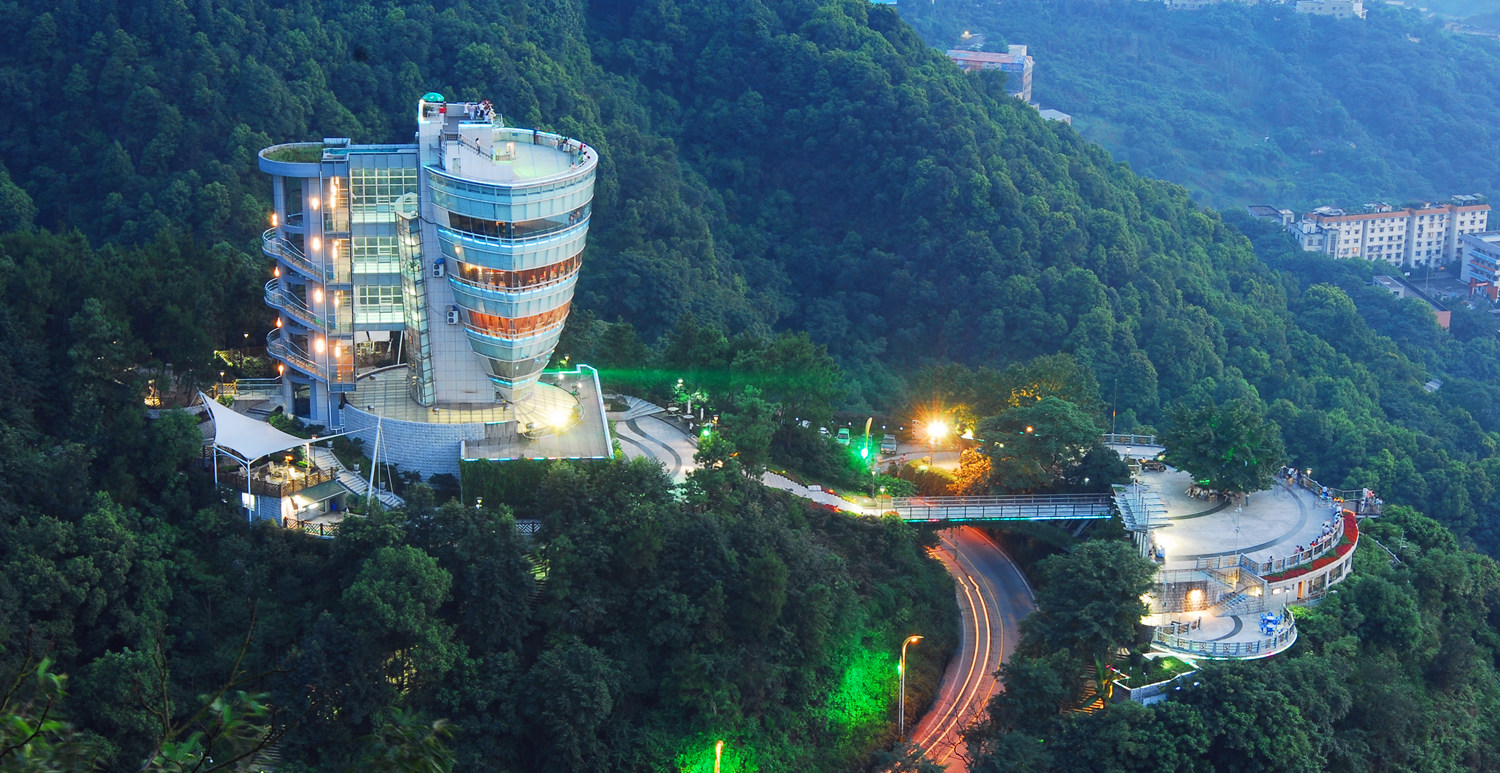 The constructed hot springs are merged with the natural mountain streams. The design of the hot spring follows Yin and Yang five elements theory. Twenty-six different styles of outdoor garden spring pools are expertly set among the rocks, streams, jungle and caves. More distinctive are the bubble bath, rose pond and karst cave pool, from which you can see the Jialing River. Other amenities include a Zen Spa, a tea bar, a geothermal steam pavilion, yoga, shadowboxing, tea ceremony, food and more.

Bolian is also known for their outstanding service. Each pool is staffed by a waiter, who provides the towels and drinks. After your bath, you can change your clothes and have a rest on the second floor, where fruit, snacks and computers are available.

You can buy tickets at the venue or book online.

Taking a taxi or private vehicle is highly recommended. 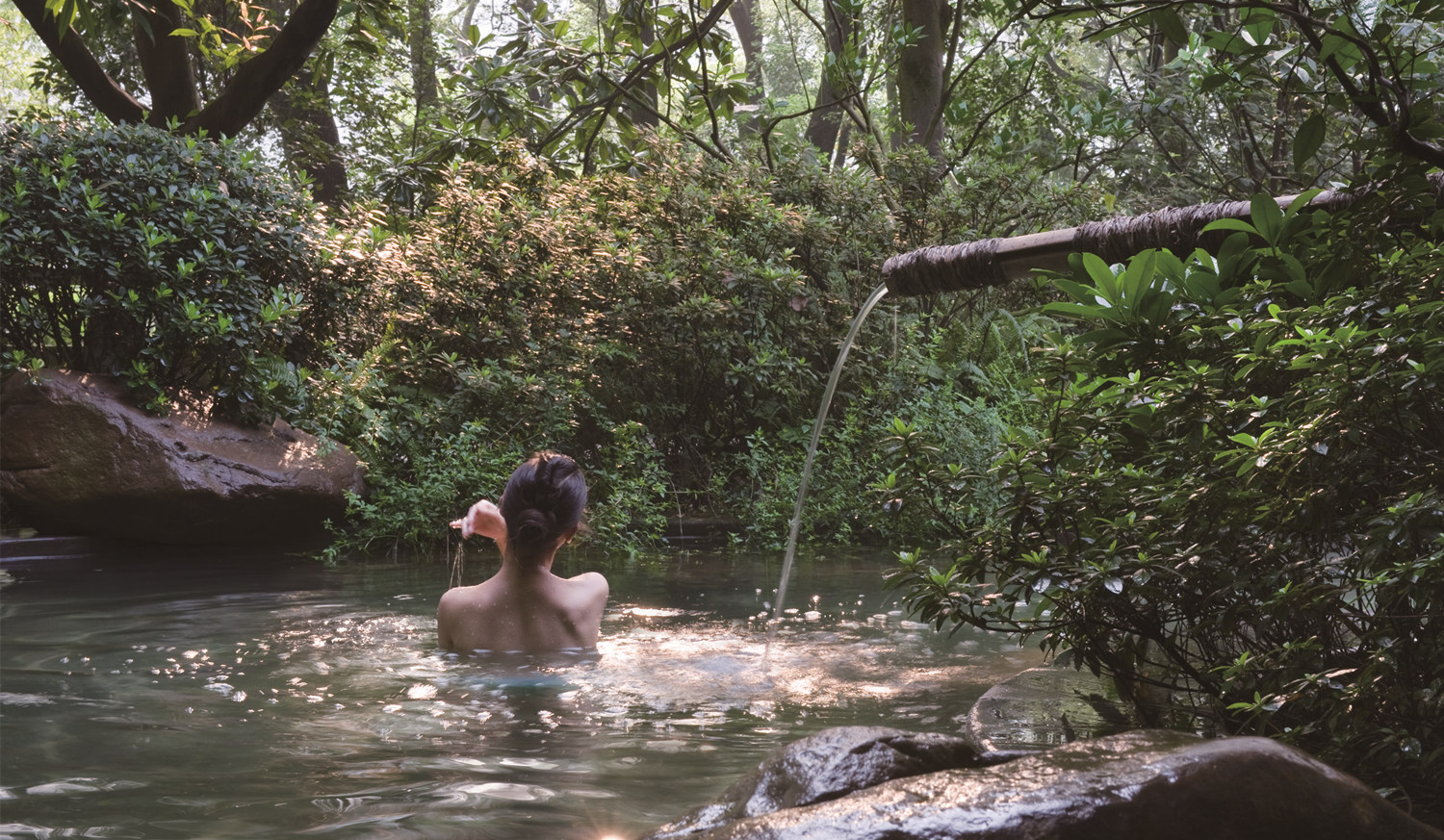 Constructed in 1953, the People’s Hall is a landmark of Chongqing. Combining occidental and oriental styles, it has a main building with traditional Chinese characteristics, such buildings can be found in the Hall of Prayer for Good Harvest in Temple of Heaven in Beijing and Tiananmen, it also has two column-style buildings in the north and south wings. There are green glazed tiles in the roofs and red columns along the corridor, together with exquisite carved rails and painted beams give the whole building a harmonious and gorgeous look. In June, 2010, the People’s Hall was awarded “Building of Excellence of Chinese People.” Now it is the main hall served for the Sino-Western communication regard to culture, art, music, etc.

There is a magic music fountain square paved with smooth and shining marble tiles in front of the hall. You can see hundreds of people dancing to the colorful lights in the beautiful nights. 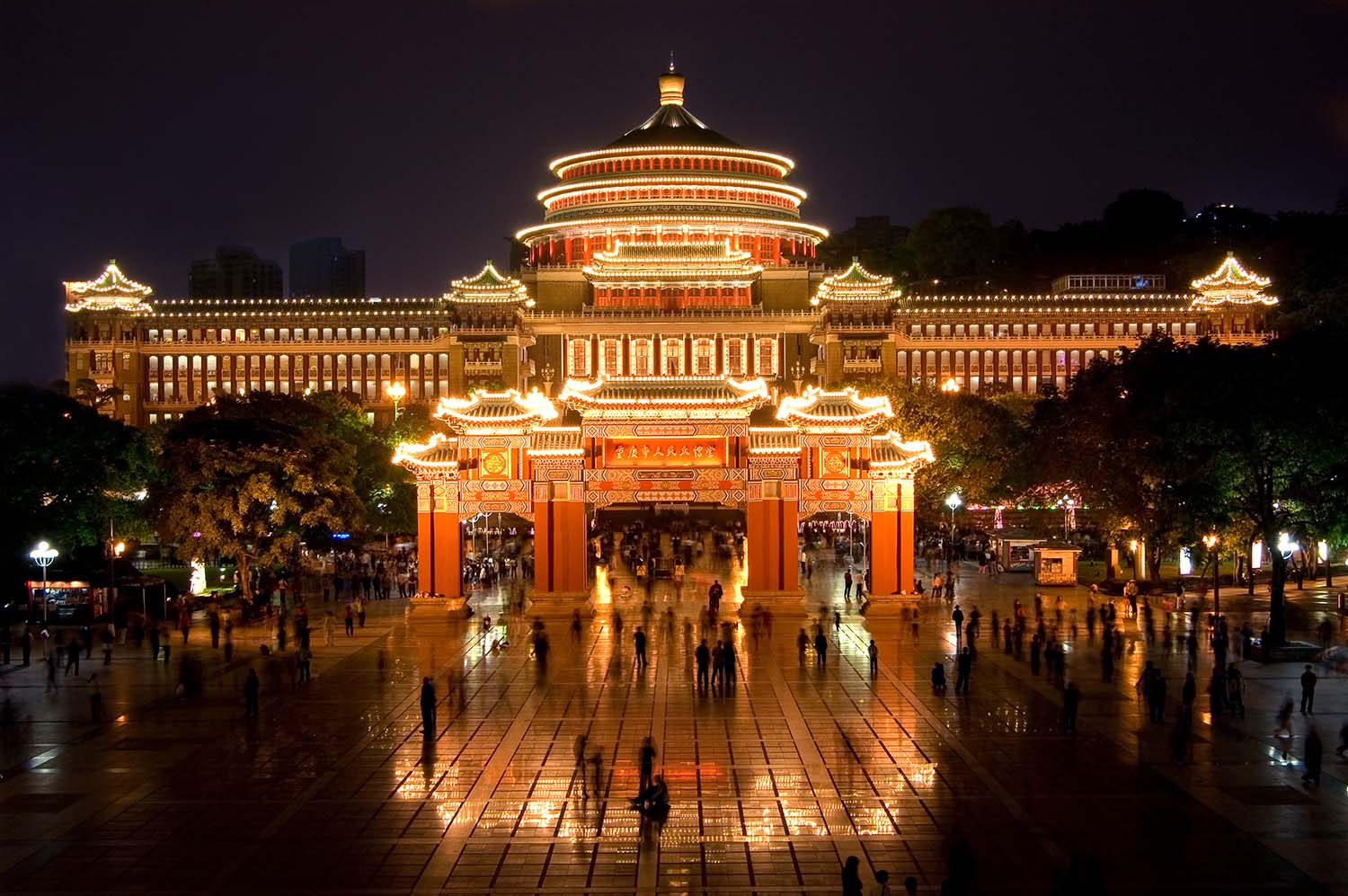 The Three Gorges Region, one of the ten most famous tourist destinations in China, is the cradle of ancient Chinese culture. Xiling Gorge, Wu Gorge and Qutang Gorge cover approximately 240 kilometers.

Qutang Gorge, located in Fengjie County, is the one which embodies surging characteristics of Yangtze River. Qutang Gorge, extends 8kms west from Baidi Mountain Fengjie County and east up to Daxi Town, Wushan County, is the shortest one of the three Gorges. But the cliffs on both sides are as steer as sliced by axe, only a line of sky can be seen in the narrow gorge. Hence many poets are marveled by the step and precipitous natural spectacle.

Wuxia, also known as “Great Gorge”, stretches 40kms eastward from Daning River, Wushan County, Chongqing Municipality, to Guandukou, Badong County, Hubei Province, and is famous for the gracefulness. Along the zigzagging gorge, strange-shaped mountain peaks and continuous rugged rocks from the most beautiful gallery among the Three Gorges.

The Goddess Peak, alias Wangxia Feng(Viewing-the-glow Peak) and Beauty Peak, is one of the twelve peaks, located on the northern bank, 15kms east away Wushan County Town. A huge rock towering among the rosy clouds, just like a slim and beautiful young lady, and it was hence named as Goddess Peak. 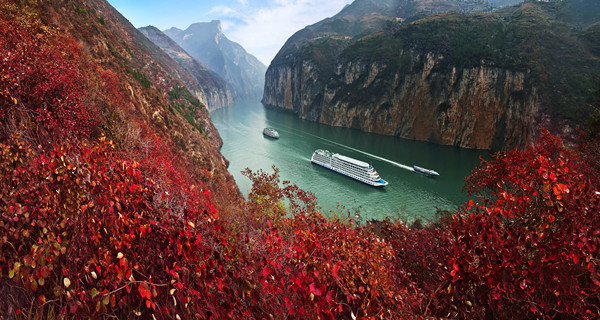